The Viral Story of the Harvard “Israeli Mezze Station”

This is the story of the Harvard Business School Israeli Mezze Station in three levels illustrated by my three posts: 1) the menu and the indignation, 2) Harvard’s response and Israel’s aggression and 3) my response to Israeli aggression.

1) The Menu and the Indignation:

Every day the Harvard Business School dining room cooks up one of their several food stations with national food from one of the countries represented by their student body. It is their way of appreciating the multiculturalism at the school, and it is actually very nice. That last week of October 2012, it was Israel’s turn. On that fateful October 28th 2012, an Egyptian friend of mine from my days at Harvard, “Mohamed El Dahshan”, was having lunch at the awesome HBS dining room, and in a state of amused disappointment, he snapped a picture of the “Israeli Mezze Station” menu and posted it on his Facebook page with a caption saying “Hilarious. So according to the Harvard Business School dining room, couscous, fattoush, zaatar, harrissa, tahini, and of course hommus are israeli foods. Love it.”

Being one of his friends online, I saw his photograph and frowned and frowned some more. I then told Mohamed that I was going to take his picture and write something about it because I really felt that such a menu encompassed a “multi-cultural and multi-religious f*ck you” in the face of all the Middle East as I liked to put it. So within half an hour, I had posted my response to the Israeli Mezze Station on my Facebook wall and tagged some of my Arab friends from Harvard. 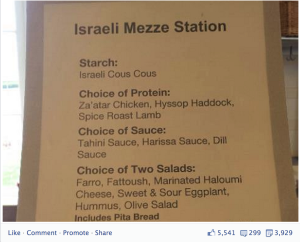 Overnight, my post got 1,000 likes. Within two weeks, my post had gathered more than 5,000 likes, 3,900 shares and more than 300 comments and had spilled over to the media, which is a step up from my record of 12 likes on my post sharing my appreciation for a laughing chimpanzee. The Jerusalem Post covered it, Al Arabiya covered it, L’Orient-Le Jour covered it and named me “Woman of the Week” (imagine if there was a typo there, like woman of the weak), The Harbus covered it, dozens of blogs covered it, I made a TV appearance on the popular Lebanese TV talk show “Men El Ekhir” and my post started circulating through email as I seemed to have made many, many Middle Easterners happy and I was a happy girl. 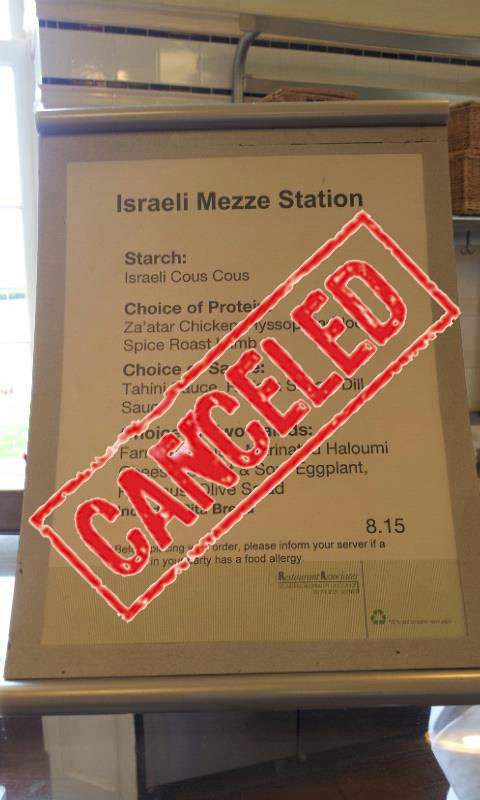 Due to the overwhelming support, the humor and the virulence gathered by my thread, Harvard Business School issued a gracious reply regretting the misstep:
“As you can imagine we’ve been following the responses to your post since it first went up last week. [..] [our] response is essentially a mea culpa on the part of the school. Clearly we didn’t do enough to verify the the accuracy of the Israeli Mezze station menu. You correctly called us on it and struck a chord with thousands of others in the process. The fact that we offended people is deeply troubling, particularly considering that our reason for having the international buffets each day is to celebrate cultural diversity. We take such things very seriously. From the moment we first saw your post we began having extensive conversations internally and with Restaurant Associates to understand why this happened and how we can prevent it from happening again.”
The Arab world was rejoicing, thinking that this was one of the few times where our “concerns” in the face of Israel had been sanctioned by the “Americans”, something that we are really not used to. It was like a mini-victory for Arabs.

I then wrote a follow-up post announcing what Harvard’s response was, and it went viral as well. I acknowledged all the different actors in this incredible story, and I replied to some of the Israelis who contended the overwhelming international opinion that this menu is not Israeli.

And then there were some unhappy people.

3) Aggressive Israeli Reactions and my Response to them: 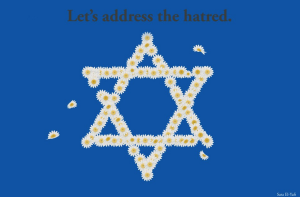 Harvard’s response sparked a wave of very aggressive and ill-willed responses from Israeli sympathizers who called me and Harvard Business School very ugly names and someone went as far as sending me a death threat on my Twitter account. Their outspoken hatred and bullying can only slash the quality level of our potential peaceful dialogue, and so I decided to address their hatred, which led to my third post “Let’s address the hatred.” The post also went viral and received a lot of support through Facebook and was even self-decidedly translated to French by Libnanews which was so humbling to me, and that went viral too as it received a lot of attention from French speakers and readers. Finally, I received no reply back from any of the haters, which is not a bad sign.

4) Moral of the Story: Is Food Really this Important?

It is not about the identity of food per se, it is about identity, full stop. Food has been used as the medium because, for a start, it is not controversial and was easy to vindicate.

The ramifications of this issue are a consequence of a time and space continuum spanning many ages of Middle Eastern/Arab frustration. Defending the food itself is about defending the identity that comes with being an Arab or Middle Eastern in an Israeli-dominated historical setting. That setting has dictated a history whereby Middle Eastern people have consistently felt deprived of ownership by the Israelis time and time and time again, with no vindictive rights. Lands, identity, an entire nation, as well as the concept of “self-defense” have all been seized and forcefully reformulated to fit a new Israeli dogma at the expense of Arab identity, with no pain validation on any level. Everything was and still is permitted to the Israelis. Painfully enough for the Middle Eastern peoples, these painful issues are deemed “debatable” by the world, meaning no matter how blatantly illegal some events were, the world decided that it is a “debate” since it’s not “clear” who’s right and who’s wrong. And resultantly, the Arabs felt that they were never dealt a strong hand, it was loss, after loss, after loss. Indeed, when it comes to the controversial issues of land occupation and right of return and right of defense etc, a “bottom line” is impossible to reach; at the stage we are at today, the world has decided that neither the Arabs nor the Israelis are 100% right about any of the above mentioned topics. Indeed, there will always be twofold valid analysis, surely with unequal weight…. EXCEPT FOR FOOD.

Thanks to linguistics and terminologies, etymologies and language, food is an easy debate to win almost because there should be no debate. Some Israelis/friends of Israel have tried to use a few arguments saying that the food is as “Israeli” as it is “Arab”, but I answered them in my second post saying that basically, no… it’s not because Israel is a new, artificial state that was formed very recently from an influx of foreign immigrants who mostly eat okroshka, hamburgers and gnocchi. There simply is a specific timeframe which accompanies the identity of “Israel”, and there is another timeframe that accompanies the origins of our foods and their names, and it is very clear that they simply do not match.

The concept of this Israeli food appropriation is an annoyance that is carried by every single Middle Eastern person who has been abroad and seen “Israeli hummus” or some other dish proudly be displayed under the Israeli flag, whether in college food festivals, or city restaurants. It is the epic annoyance of all of us. Why hasn’t it been brought up as virally? Because people think that the fight with Israel is so deep, and so offensive that we are not gonna start by talking about the food when there are lands being illegally appropriated by Israel, illegal settlement being built on Palestinian lands, human rights violations happening every day, and an apartheid system being blatantly in place right in our faces. So people are obviously angry about so many other things, and the discussion would go towards the “more important” issues like the above mentioned cases and not towards “hummus”. But now we see that thinking in the opposite way may actually prove to be a lot easier. It is so easy to make a case and understand once and for all that the debate about typical Middle Eastern food being Israeli is unacceptable, and THAT is a definite gateway debate that has the ability to show that there are other unacceptable things to be discussed… it just needs to be done in the right way.
This was one way. Straight-to-the-point, united and humorous. Indeed, I believe that one of the strengths of my post was that it made people laugh rather than just get angry, and this started a wave of truly fantastic reactions that made this whole thing successful… And now, after we’ve seen the amazing reactions, I think it is only obvious to say that there is a strong message to be taken away here: With the correct respectful attitude, and a solid, respectful united voice, you may just be able to go anywhere you want. It is high time we mobilized our brains and our resources and started getting respectful work done in the name of our region.

The Links to all the Media Covering the Israeli Mezze Station Story:

Make sure you press “SEE MORE” to see my entire text.

1. My First post: My comment on the Harvard Israeli Mezze Station:
2. My Second post: After Harvard issued an official reply, I wrote this follow-up:
3. My Third post: Then there was then a wave of “antagonism” from Israeli sympathizers, and I wrote this as a response:
Concerning the articles that reported on this “controversy”, there are dozens and dozens of them… It goes on and on for 10 pages on Google. So I just tried to pick a few:
The Neutral Reports:
1. Harvard Business School’s Official Newspaper “Harbus”
2. Al-Arabiya Newspaper: If the page doesn’t open, you can read the original Al-Arabiya article here
3. Jerusalem Post
4. Boston Magazine
5. Harvard Crimson
6. NOW Lebanon
7. Blog Baladi
Some Happy Reports:

1. L’Orient-le-Jour, leading French Lebanese newspaper, named me “Woman of the Week” (In French) 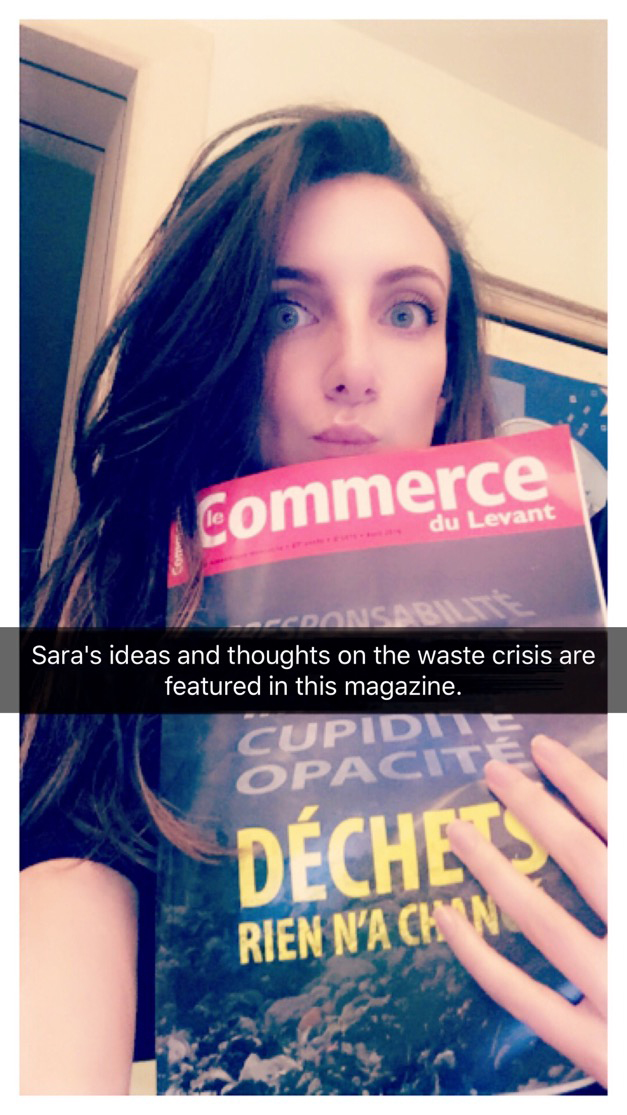 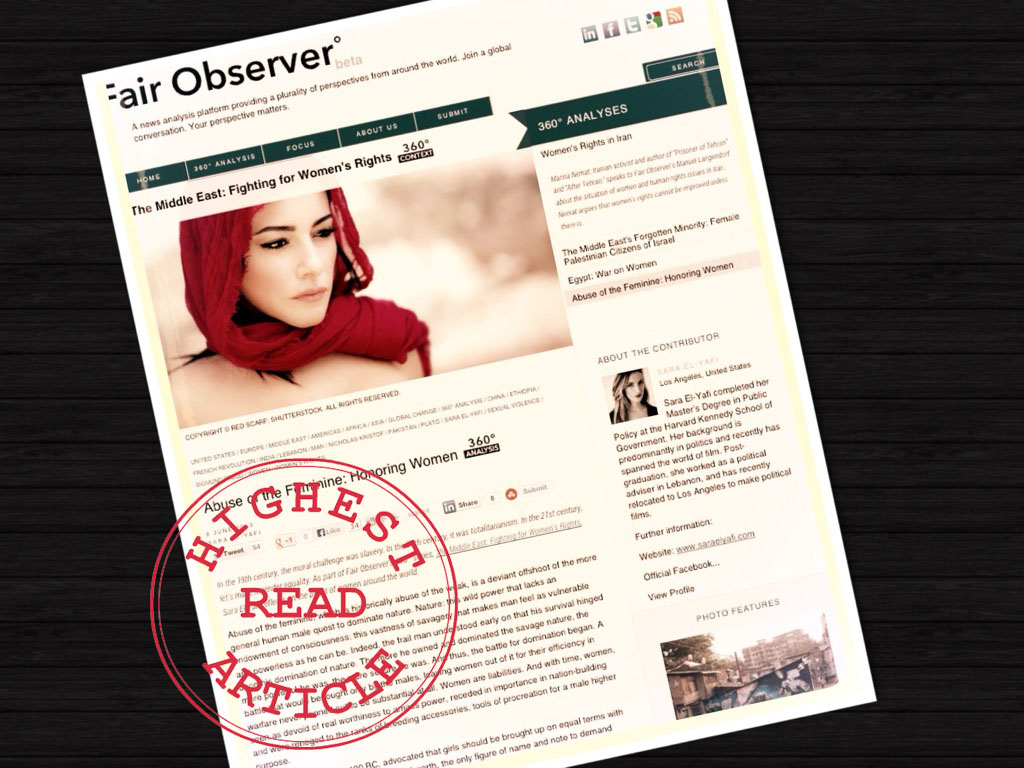 What the Press Says

Abuse of the Feminine: Honoring Women (featured in Fair Observer) 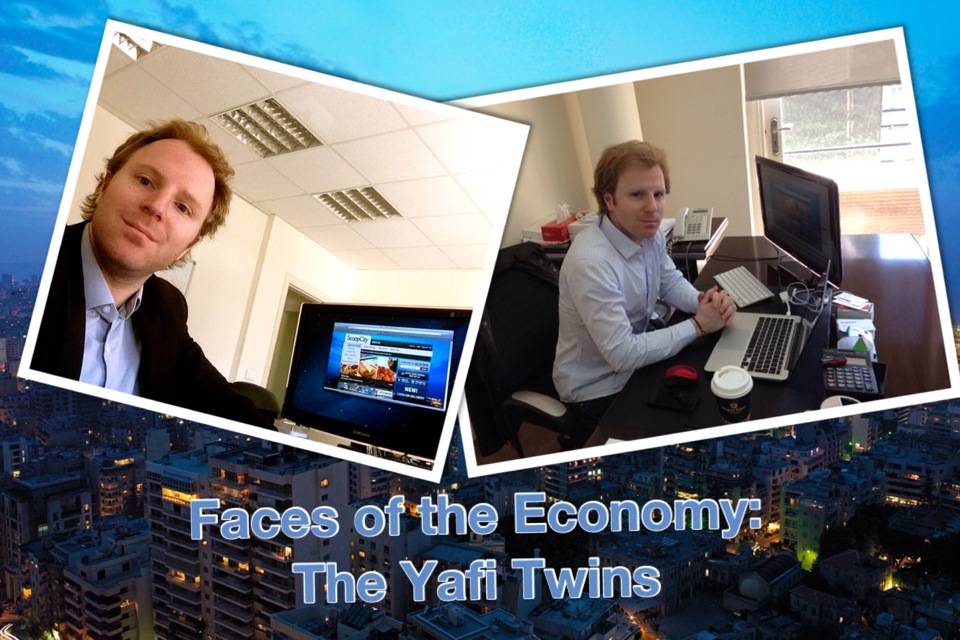