The damage done by the hypocrisy of our media around the world cannot possibly be measured. Media tells us every day what’s important by the stories they choose to cover and how they place them. It’s called agenda-setting. But occasionally, agenda-setting falls in the hands of a reporter with intellectual integrity, and history gets properly written.

This is a tribute to Helen Thomas, who passed away three days ago at 92. Daughter of Lebanese immigrants, she was a “trailblazing” White House correspondent who sat in the first row of the White House briefing room for five decades and was known to “grill” the presidents and their representatives with her very difficult questions.

She was the one who consistently asked about torture administered by the US during George W. Bush’s tenure, she cornered Nixon about Watergate, pushed Reagan on Iran Contra, Clinton on the hypocrisy, Bush on his thirst for war (“don’t you understand -you- brought al Qaeda into Iraq?!”, she said), Obama on why he was still in Afghanistan, and attacked Margaret Thatcher for the suffering caused by her economic austerity policies, upsetting her to the degree that Thatcher turned flustered to President Ronald Reagan and said “Who is that woman?”, Reagan replied with a huge smile “Oh that’s Helen.” They sure dreaded her, but they immensely respected her.

Helen Thomas needs to be known and remembered by all. First because she was a woman who trailblazed her way in a chauvinistic man’s world and reached the highest posts no woman had ever reached before. She was the first woman to cover the White House, the first to break the all-male hold on the National Press Club, the first woman member and president of the White House Correspondents Association, the only woman accompanying Reagan on his first China trip.
Second, because of her intellectual integrity. She consistently pushed back against the hypocrisy and nonsense of politicians, and refused to accept the lies of politics and government regardless of potentially being bullied, but she was glorified and respected for being so unequivocally pro-democracy. She never stopped working. She was 90 years old and still working from her front row at the White House. And she was a woman. And a Lebanese-American one.

But at 90, in 2010, she was forced to retire after she said in a casual interview that Israeli Jews should “get the hell out of Palestine” and “go home” to Germany, Poland and America. This discredited her…. after a 5-decade long White House career as being anti-Israeli and antisemitic. But Helen Thomas’s bias was not antisemitic, she was simply the voice of the powerless. That was her only bias. She championed the poor, the underprivileged, and the victims of human rights abuses regardless of their origins. And I believe that her sympathy for the Palestinian people was rooted in her instinct to defend the oppressed of the world because that is what she did for her entire career. Had the Israelis been the occupied people whose dignity and rights had been violated by the Palestinians, she would have been just as vocal in defending the Israelis. Integrity knows no color, ethnicity or nationality, and Helen Thomas was its incarnation.

She will be missed. Rest in peace Helen Thomas.

*Photo above: Helen Thomas and the ten US presidents she covered: Kennedy (her favorite), Johnson, Nixon, Ford, Carter, Reagan, Bush Sr., Clinton, W. Bush, and Obama (who shared her birthday). 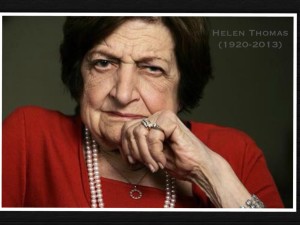