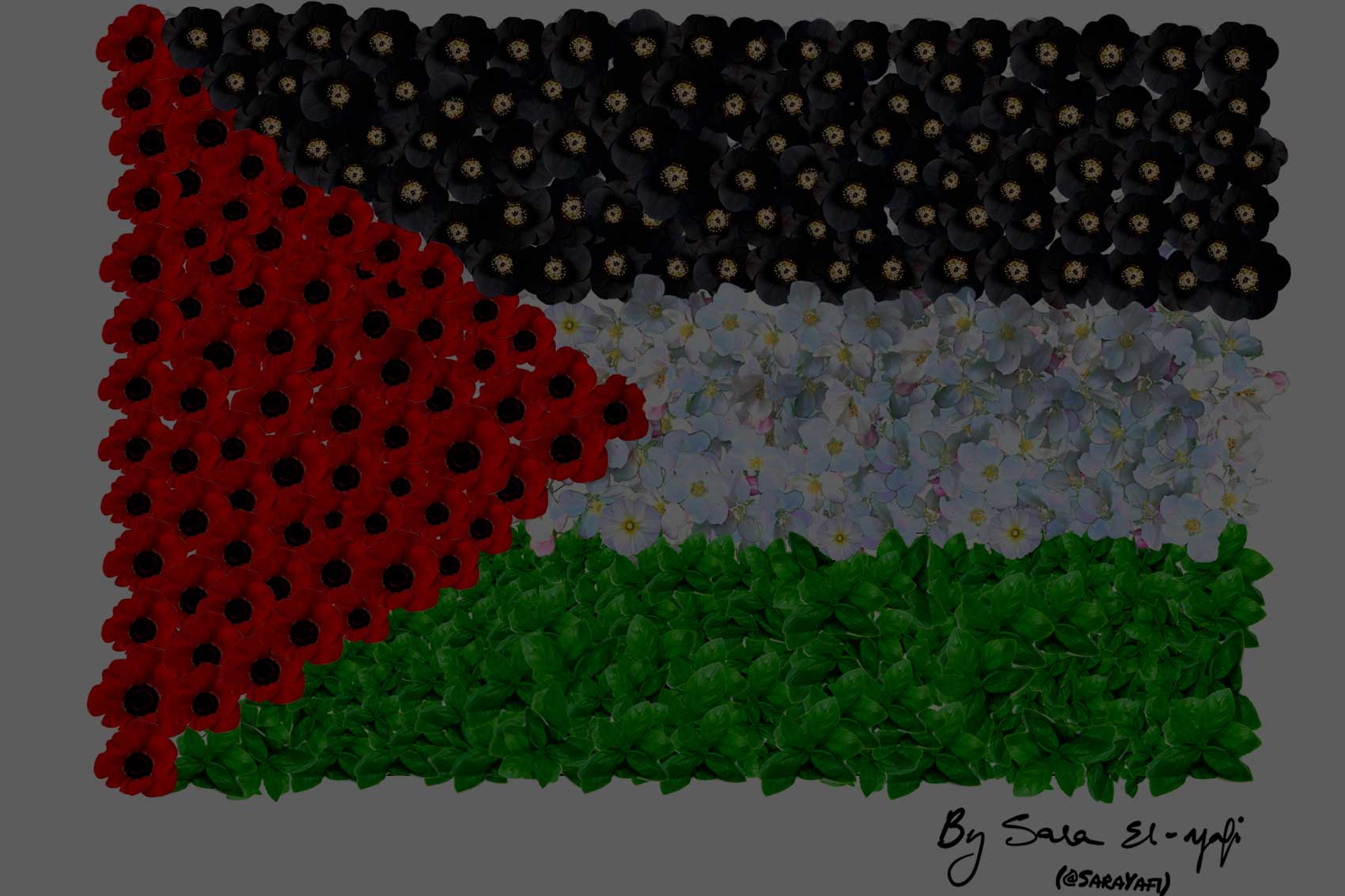 You have sent me many lovely emails over the past 8 years, to the extent where I have a folder named “Barack Obama” nestled right under “Mom”, and “Bills” (as in receipts, not Clinton) in ode of the three entities who email me the most — see screenshot of my inbox below. Like Mom, no matter how stressful your life became, you still took the time to remind me how amazing I am. This only shows what an extraordinary heart you have, and I thank you for remaining committed to our friendship. Also, thank you for the many invitations to meet up, I stopped trying to go as security never let me through the door.

(Some friends tried explaining to me that these are mass-campaign emails that everyone receives, but jealousy always gets the best of people, especially my friends.)

Mr. President, I am writing you today what is perhaps the most important letter I have ever sent a friend. It is a letter pleading for peace in the Middle East that only you can still usher in. As a Lebanese woman who, like all my compatriots, endures the internal repercussions of the conflict with Israel on a daily basis in my own country, I speak on behalf of millions and millions of people around the world whose hearts beat for more humaneness to be shown from the United States towards our region. I ask you please to diplomatically recognize Palestine before you leave office, and help it achieve full United Nations membership.

Mr. President, if anyone said just ten years ago that a black man would be the U.S. President for 8 years running on a platform increasingly evolving in favor of women, ethnic minorities, gay rights, free healthcare, and action on climate change, they would have been begging to be fitted for one of those jackets where the sleeves tie in the back. (I know it’s called a straightjacket, but I find its description hilarious.) But you have turned yesterday’s delusions into today’s matter-of-facts through your rare ability to communicate hurting realities to the people, and encourage them to see truths in a new light.

You have a heart, Mr. President. And I write to you today with the purpose of encouraging you to display that same heart through this one diplomatic move that will have the power of bringing peace to the Middle East.

We’ve heard Secretary Kerry’s detailed speech on December 28th; the US administration understands all too well how grave the situation has become. There is a fierce deadlock between Palestine and Israel today mostly due to the unstoppable illegal settlements being built on Palestinian territory by Israel. A UN resolution abstention by the US will unfortunately do nothing to slow down the settlements because UN resolutions make no difference in the world of Israel, Mr. President. Israel has ignored and violated 32 UN Security Council resolutions, that, by law, are binding, which is a violation of the Charter, and by extension, international law. To illustrate the perils of a country violating a UNSC resolution in the world order, it is interesting to remember that the U.S. cited Iraq’s violation of two major UNSC resolutions as a major reason for its invasion of Iraq in 2003. Israel leads in the list of countries with the highest number of UNSC resolution violations to date, notwithstanding the additional dozens and dozens of UN General Assembly Resolutions that it regularly violates, all with total impunity since its creation. Israel simply pays no attention to any UN resolution, even though, ironically, the chief reason why it exists in the first place is because a UN Resolution was passed in its favor.

I am not stating these facts for the purpose of shunning Israel, I am stating these facts to point to the uneven quality of the conflict, and why it won’t get resolved by simply “leaving behind a set of principles” that we hope one day will emerge as the basis for talks. Urging both parties to make the necessary concessions, as Mr. Kerry did in his speech, will not serve us in our quest for peace because the negotiating weight is in the hands of Israel. Israel knows that the Palestinians will not settle for the meager peace conditions it has offered them, and Israel has no incentive to make any better offer since it commands all the diplomatic power, and doesn’t need anything from the Palestinians. It has everything it can ever need, and has all the time in the world. But not Palestine.

Israel shall continue with its hefty building of illegal settlements with the same impunity it has always enjoyed, until the Palestinians will have literally no space to thrive anymore that their place at the negotiating table will no longer exist. You know, as much as we do, that this is the ongoing Israeli strategy, which will be finalized within 20 years when the Israelis would have officially intercepted all Palestinian lands. The Palestinians are too small in their political appeal to consolidate a voice deemed attractive enough for the US to support, they keep being collectively punished for the awful rockets that land on Israel, yet the majority of them have no control over any of its decision-making forces. Palestine is set to disappear, Mr. President, and it will be at the hands of a United States that has continuously refused to come to terms with its existence.

You, singlehandedly, can change this for Palestine, and for Israel.

Dignity, Mr. President, is the key here. Evolutionary psychology, social neuroscience, the literature of psychology on trauma and recovery, the work of Immanuel Kant, William James, and other philosophers, and the field of conflict resolution all agree that dignifying others holds the key to peacemaking. Israel is dignified every day in the United States through diplomatic praise and adulation, deep friendship ties, the largest military aid in the world, and the most powerful U.S. lobby fronting it. Palestinians do not enjoy any kind of similar support, and that is not even what is asked, except for dignity. Dignifying Palestinians starts with recognizing their identity and their right to exist.

The Palestinian people have suffered too much indignity; people whose dignity was so deeply violated will not concede until they feel they have recovered their sense of worth. They are ready to be broken, but they will not bend. In their attempt to get retribution from those who wounded them so deeply, they will even self-immolate, but they will not bend. The pain is too deep, and relying on their hopelessness to put an end to their own suffering is overlooking the disaster of that hopelessness: it is dense enough to swallow them whole, which is the preferred scenario for so many of them than to making peace with Israel, brokered by its American henchman, under the current conditions.

I have studied the Middle East and its conflicts for the better part of my life, including earning a Master in Public Policy at your very own Harvard University, and I can tell you that if the conflict with Israel and Palestine is a fire burning, the US policy towards the conflict has been the oil being poured atop the flames.

The people of Palestine live in some of the most horrid conditions, and they have no identity. The politics of the conflict has usurped their story, and Palestine today is boiled down to “Hamas” and “Fatah”, both of which are unfortunate choices for a people caught in the middle. Did you know that there is a growing non-violent resistance movement amongst Palestinians today vying to change the face of Palestine? But they have no power to grow more because they are not seen. Recognize their state, and you shall witness the peacemaking powers of the Palestinian people.

Watch the transcendental transformation that will occur in the region when they shall finally be diplomatically seen. The Palestinians’ efforts shall be diverted from the exhausting resistance to forging themselves into powerful, educated, dignified, and academically advanced intellectuals to match their brilliant Jewish compatriots — for proof, examine the greatness of the Arab population of Israel. On the other hand, the Israelis will finally have the richness of a real culture, the true camaraderie, that we all know they are looking forward to having with their neighboring countries. Only then will the Israelis finally fit amongst their neighbors. Your act will start the domino effect of expediting all peace processes in the region, and my country, Lebanon, who has suffered too much at the hands of the Israeli-Palestinian conflict, will also be able to make peace with Israel once Palestine is dignified.

There is no way around this truth: the road to Israel’s security runs through Arab hearts, and the road to Palestinian liberation runs through Jewish hearts. Such an understanding will only happen once we stop choosing to see a humanitarian crisis based on whether we like the nation that is enduring it or not. Please don’t force the Palestinians to live with any more humiliation.

Mr. President, I may not agree with all of your choices, but I have never stopped admiring you for the way you conduct your politics: your ethics, and principles, which you employ at every level that you operate, have gotten the best of you. The simple fact that you’ve hardly ever resorted to mockery, defamation, or injury against your opponents to get ahead is proof alone that your soul is larger than your politics. In contrast, your opponents, every single one, democrat and republican, have regularly attacked your person, and said many hurtful, disgraceful, and injurious things about you, and they have covered it up with the game of politics, but you hardly ever retaliated in baseness. This characteristic is larger than the Nobel Peace Prize, and larger than your photo fist-bumping the janitor, it serves you in the priceless way you choose to live your life on the most intimate level. You see all humans for being humans, and that is not lost on us. Without taking away from your many achievements, your biggest legacy will be the quality of your person. Abraham Lincoln said “Nearly all men can stand the test of adversity, but if you want to test a man’s character, give him power.” What you did with yours is exemplary, but one more act is needed, and you still have the power to do it.

Please grant American diplomatic recognition to the state of Palestine, as 137 countries have already done, Mr. President, and help it achieve full United Nations membership. It is the right thing to do. We might not see a President with your moral character and courage in the Oval office for many generations to come, by which time it would simply be too late. Please don’t force the Palestinians to live with any more humiliation. 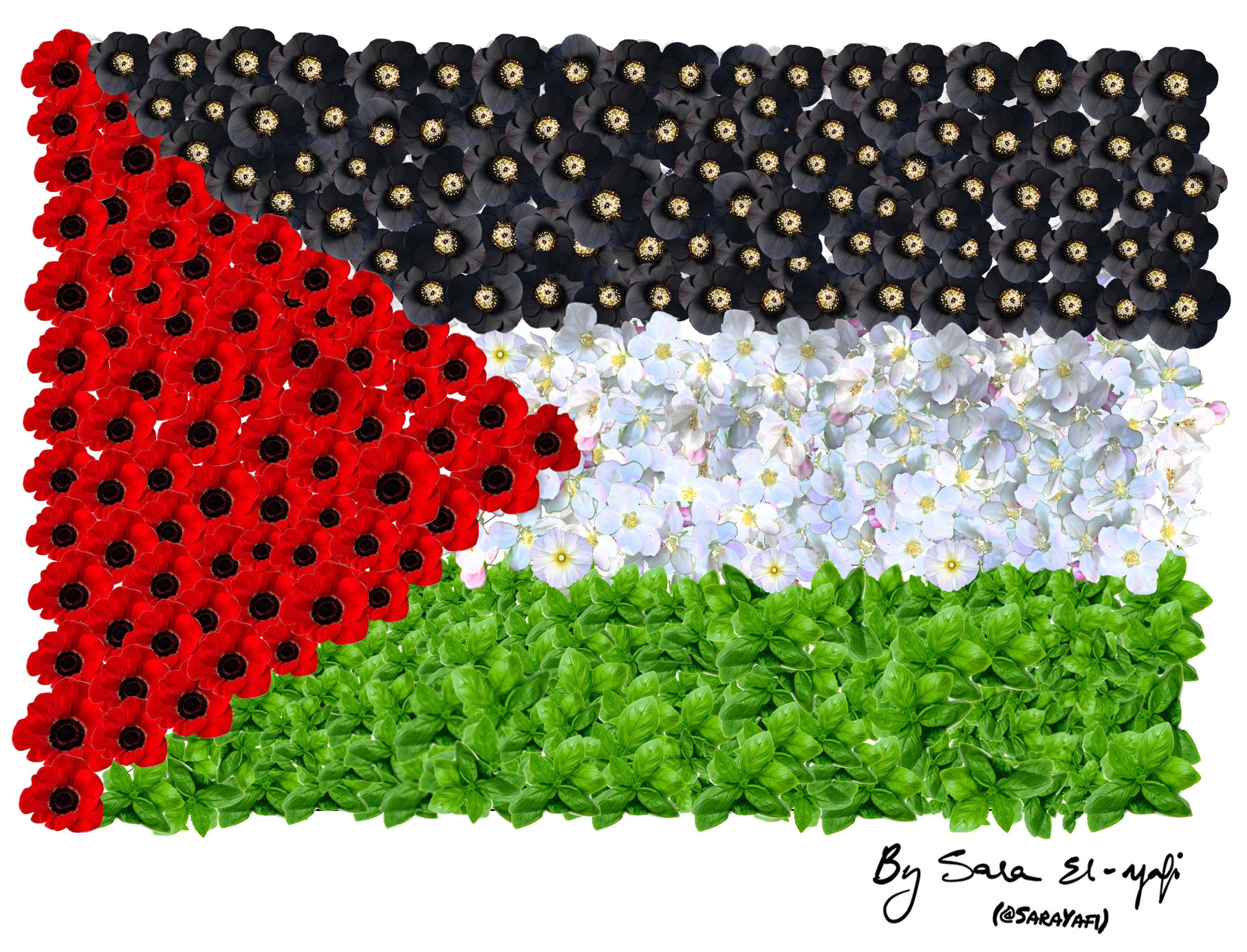 Please accept this collage of the Palestinian flag made up entirely of flowers and plants that symbolize peace. The red poppy is the most notable flower that symbolizes peace in the world today, and serendipitously, it is the unofficial national flower of Palestine, as well as Israel. I’ve colored the black section of the flag with black poppies, the white section with white poppies and apple blossoms, and the green section with basil, which is used by folk in their teas for its soothing, and peacemaking powers, and make excellent pesto. “Treat people as they want to be, and you help them become what they are capable of being,” said Goethe. This is true for individuals, and it is true for nations. Dignify the Palestinians, Mr. Obama, in return, they shall dignify the peace process.